In my Fictional Character Birthdays post from last Sunday, I preluded to an ultimate geek adventure I was sent on for my birthday. In today’s post I’m going to reveal everything that nerdy adventure (with surprise ending) entailed!

I knew my boyfriend was planning something for my birthday; he would conspire with people on the phone and shut himself away in our room while he worked on said project; aside from those minuet details though, I knew absolutely nothing of what he planned.

The morning of my birthday I surprisingly awoke to find the apartment empty; I’ll have to admit that I wasn’t expecting that one. I went downstairs and found the following sitting on the kitchen table:

Seeing as it was only 7:00 AM, I then had to excitedly wait around for 3 hours until 10 finally came. During this time, I texted my boyfriend to inquire where he was, what I needed to pack for the day, and inform him that I was “totally geeking out.” He replied that he’d be one step ahead of me all day, to wear walking shoes, and to pack a hat and gloves. After that, radio silence from him.

At 9:55 I logged into Skype (honestly expecting Ron to beep in on me). To my surprise, my brother video called in from Colorado; he had gotten up early just to deliver my first clue (I later found out this stage had initially included my Father up in Alaska, but that ended up not panning out).

Clue #1: Your Triforce is empty so let’s cut to the chase, head out the door without much delay…straight up the hill, to where we first met, will be a kind hearted man with your first real test. 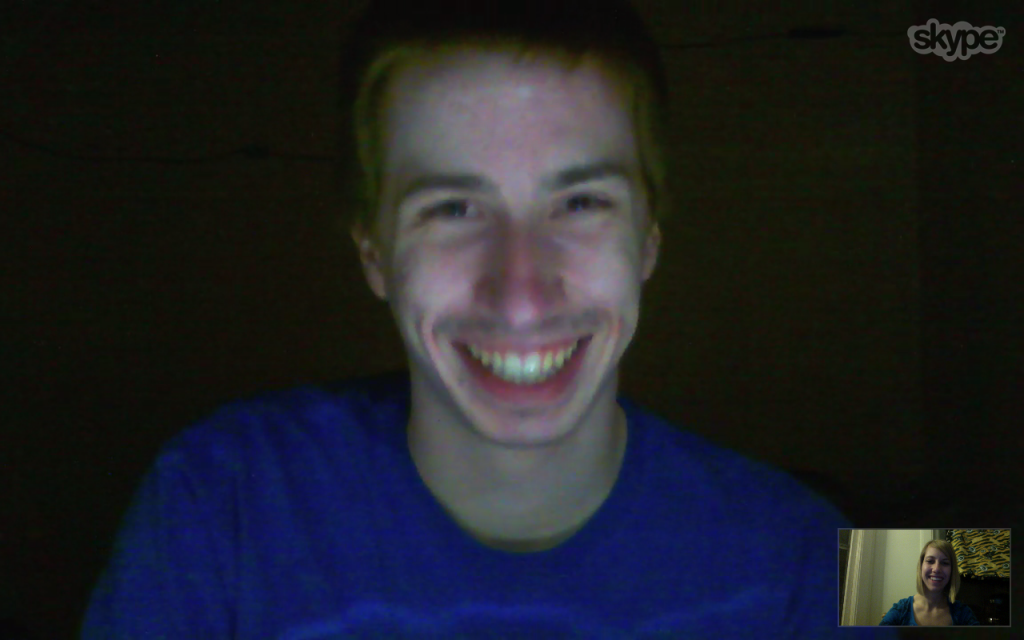 I knew the answer to Clue #1 right away. Ron and I met playing Friday Night Magic at our local comic book store, Collector’s Connection (first sign of how nerdy and awesome we are together 😉 ).Shortly after chatting with my brother, there was a knock at the front door…Shelby, my travel companion had arrived! Shelby and I hoped in her car (aka Nugget), and off we went!

Upon arriving at Collector’s Connection, I found Tim, the owner, inside awaiting my arrival with a puzzle challenge to be completed. “Task: Arrange the letters to spell out the card, from when we first met, you thought was an all star.” Another easy one! I was playing a black/white deck at the time that ran High Priest of Penance. Ron still pokes at me for playing that one, but I still stand by that guy! After solving my challenged, I was awarded the first piece of my Triforce and Clue #2. 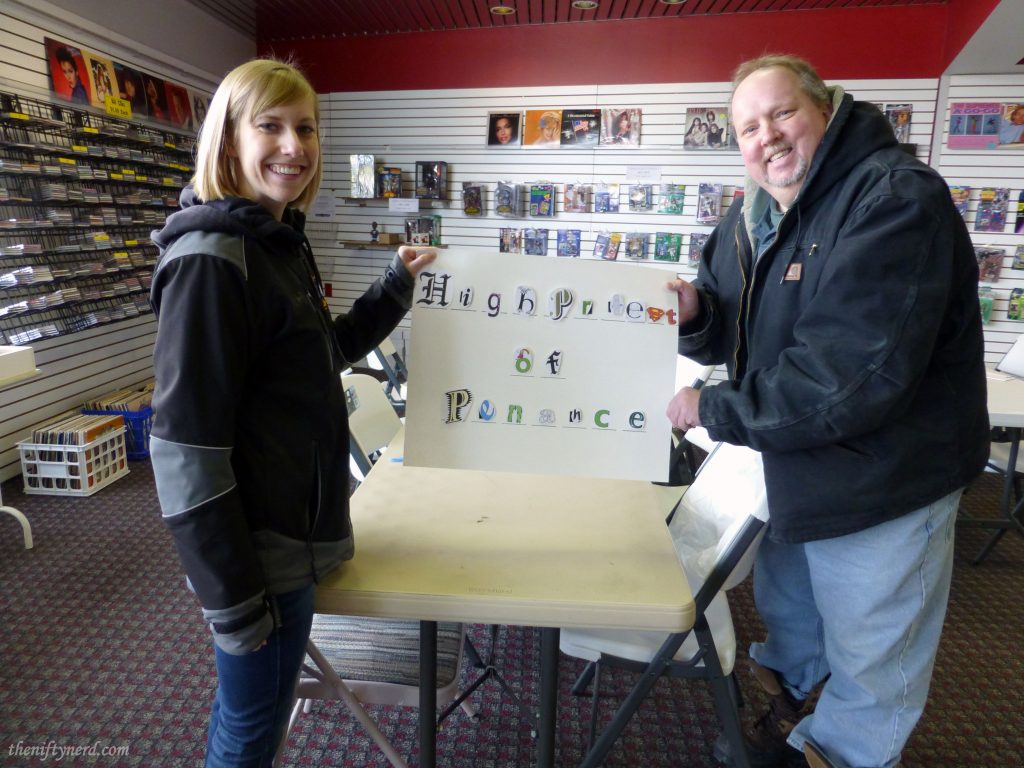 Clue #2: There are 5k places in Duluth for you to look. Go back down the hill to where it starts and ends. Walk, stroll, or run towards a place where remembrance is found. If you hit our secret spot you must turn around. 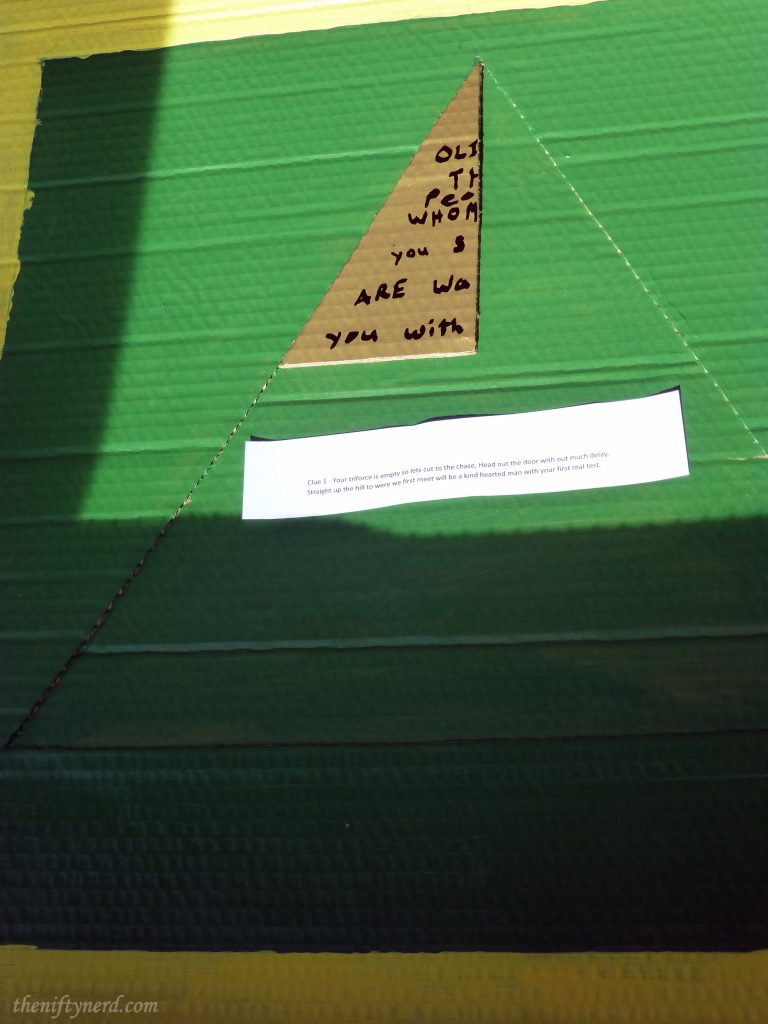 The most likely answer to this clue was the Lake Superior boardwalk. Ron had ran a 5k race down there last fall; additionally, there is a veterans memorial along the walk (we had recently visited the site in search of the medallion for Duluth’s annual Winterfest medallion hunt). On a beautiful, but chilly morning, Shelby and I took off strolling down the boardwalk. I was hoping we’d be meeting another person (and not having to find a item based on the clue given). Upon reaching the memorial, we did in fact run into Nathaniel. Nathaniel informed me that Team Rocket had kidnapped 4 Pokemon. It was my task as a trainer to rescue them.

I searched the area and recovered Mew, Charzard, Ditto, and Pikachu. Having completed the first part of my task, I was then asked which of the four Pokemon symbolized mine and Ron’s relationship. The answer was Ditto (think Swayze and Ghost here)! After answering correctly, I was presented with my third clue.

Clue #3: Lunch fast approaches time to go to the house, where conversation is plentiful and no one judges. Proof is in you’re gut so trust it quite clear, play to your strengths and have no fear. 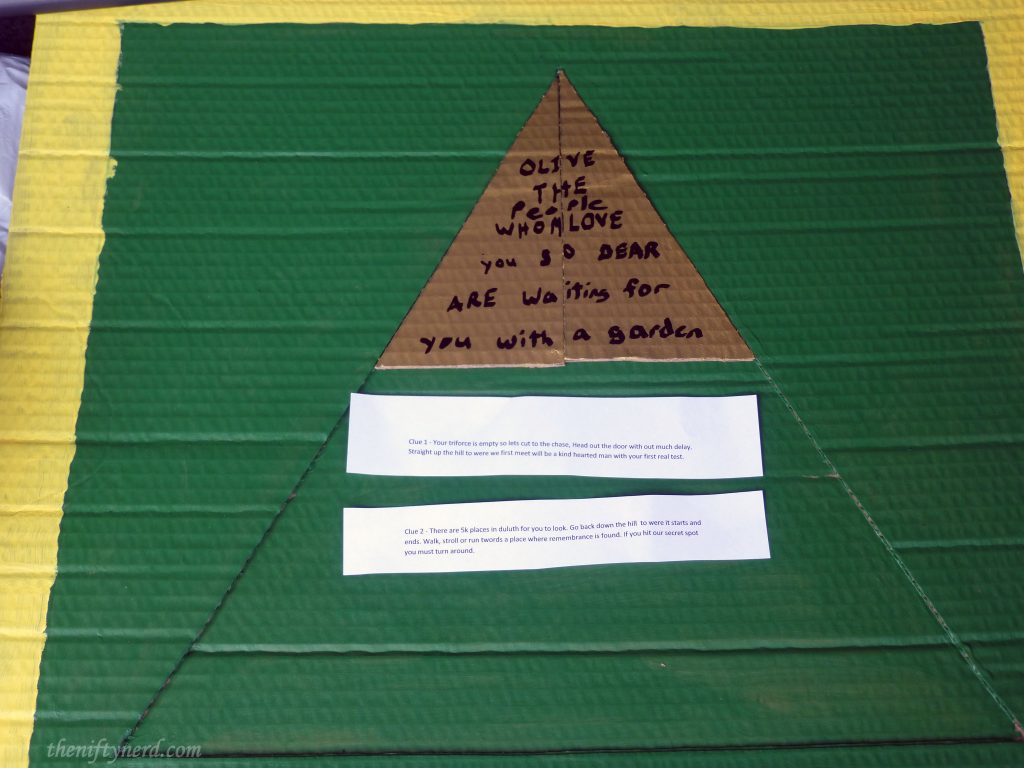 Knowing better, I actually mistook this clue too literally the first read through…I thought I was literally suppose to go back to the house. After a second thought, I knew the answer to be the Oriental House. This is the location where we meet with our Monday board gaming group for dinner before the games commence at a local game store.At this point, I was moving through the clues too fast, so Shelby and Nathaniel stalled me with a layover at a local coffee shop for warm drinks. Then Shelby and I were off to lunch. At the Oriental House I was greeted by three friendly faces from our gaming group; David, Kate, and Chris. 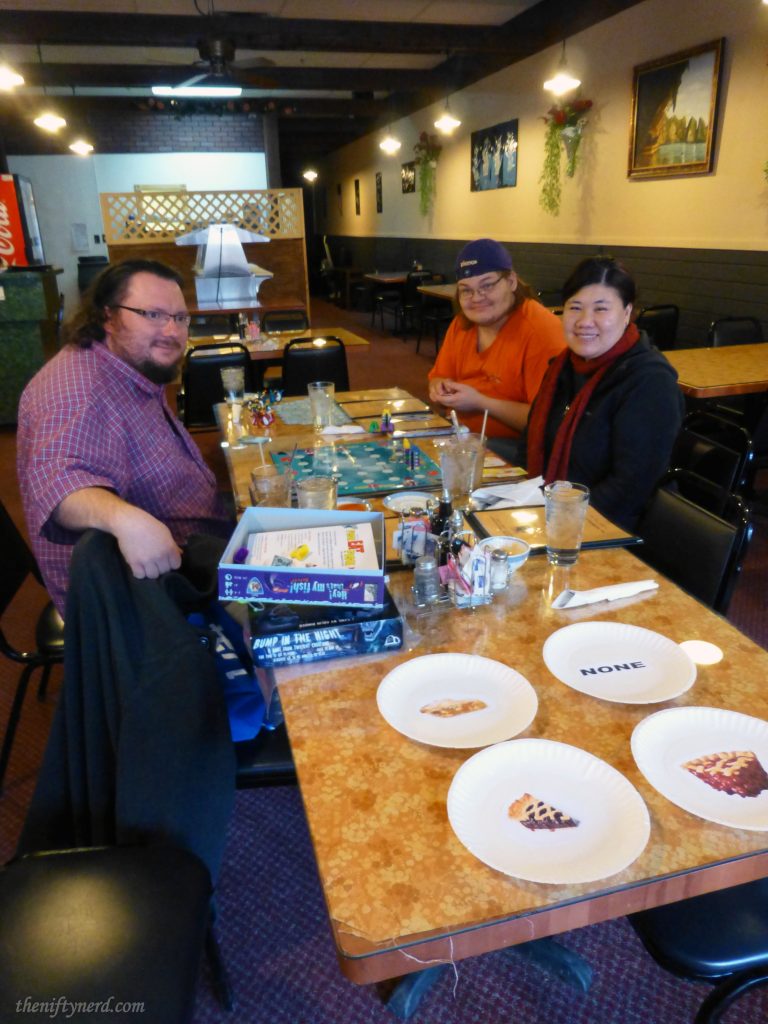 We enjoyed an excellent meal and a fun round of Hey, That’s My Fish. After lunch I was presented with 4 plates of pie and this trivia question: “Pick the pie that Dean [from Supernatural] would get.” I considered the options and answered with cherry pie. When told I was incorrect, I argued semantics, “…you asked me which pie Dean WOULD get, not which pie Dean DOES get, which would be none.” The group jokingly chided me, but let me get away with it nonetheless. I was then presented with my 4th clue.

Clue #4: Your stomach is full let’s find nine times the fun. The kids wish they could join you for this one. A place full of adventure that used to be a carnival of thrills. At this place you can swing and miss or fall from a high place. Be happy you’re full or the smell from their neighbor would make you a boar. 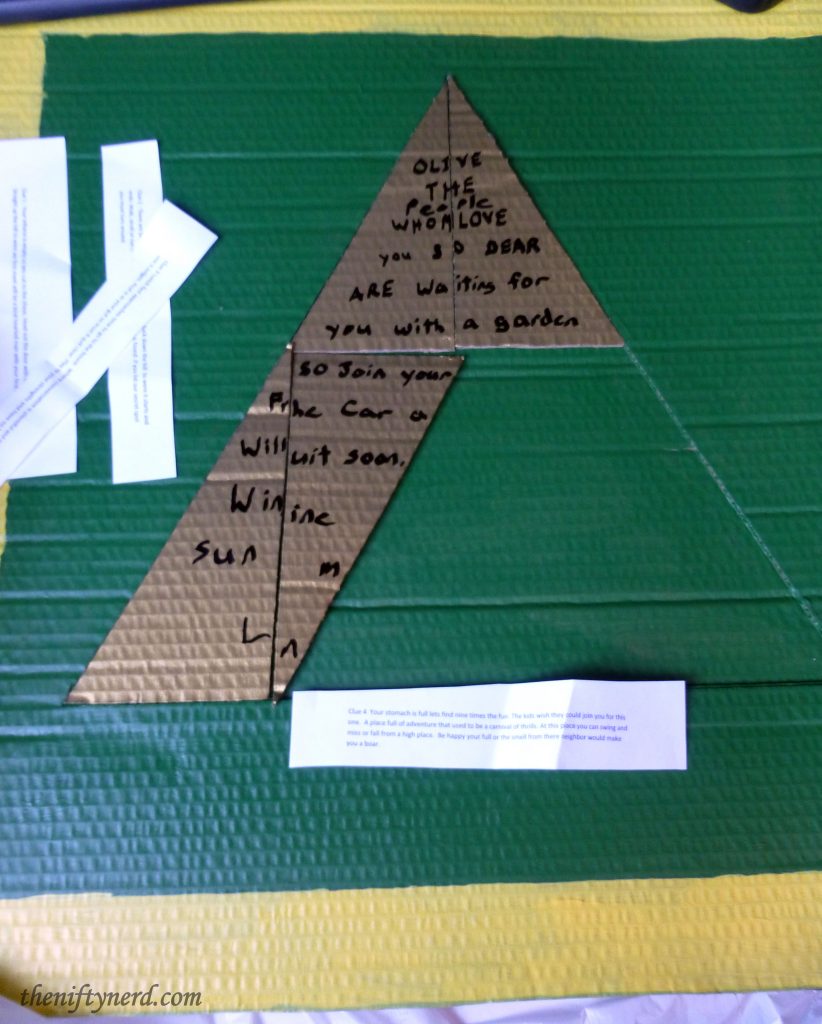 This clue could only be pointing to one place, Adventure Zone; a place with mini golf, rock climbing, laser tag, and other activities that resides next to Famous Dave’s. Upon arriving at Adventure Zone, Shelby and I ran into Ron’s Mother and Sister. We played a round of mini golf and I collected various figures from the animation works of Hayao Miyazaki along the way. To stall for time, we played skeet ball afterwards and bought Warheads with our ticket winnings. I was then presented with clue 5 of the day.

Clue #5: This clue leads to the end but not of the day. On a day filled with love we enjoyed our time in this place. Watch where you park or the witch will come out with a puff and sneer to make you park further from here. 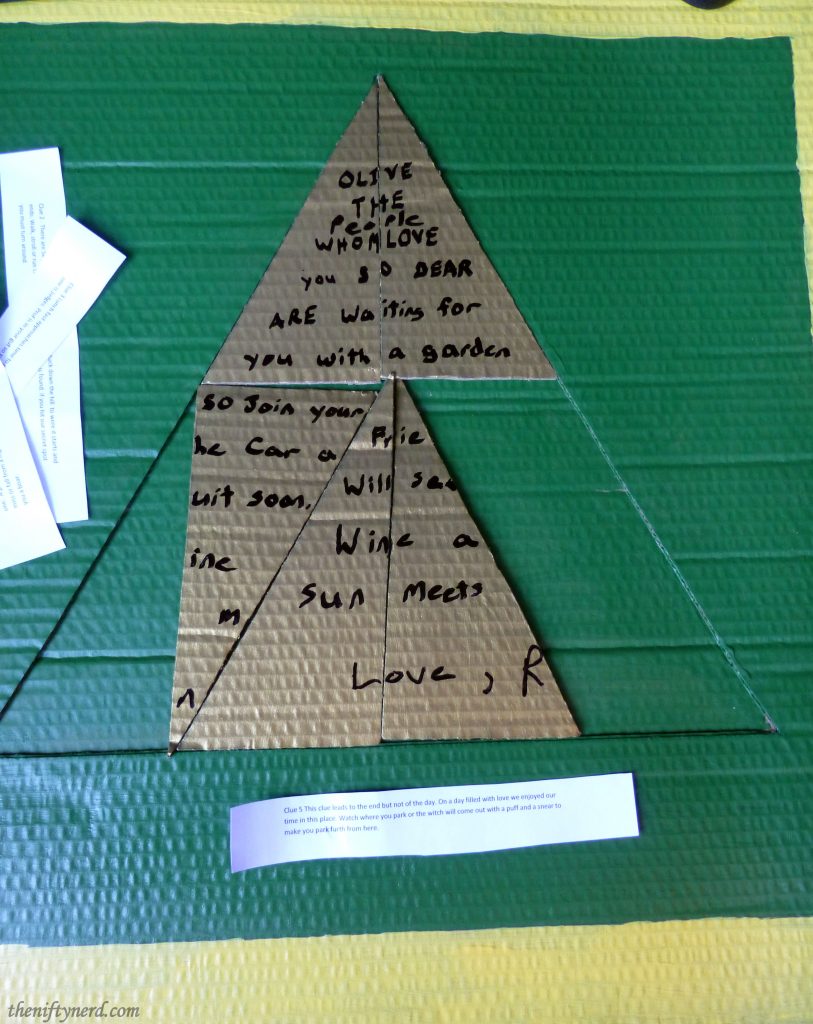 Those of you who read my blog, particularly my Valentine’s Day related posts, might know this one. The clue pointed to Dungeon’s End, another comic shop in town that him and I spent last Valentine’s Day playing board games at. The witch refers to a lady who works at the bank next door to the establishment; she will not let anyone park in their giant lot.

Shelby and I traveled across town and were greeted by Jeff and Justin, a couple of the guys from our Magic the Gathering group. My task here was as a follows; “The walking dead are upon us. Play Zombie Dice to escape to the next clue.” I kicked butt in game two when I rolled 8 brains (of the needed 13) in one turn to win it! With our time up at this stop, and a victory under my belt, I was given the next clue.

Clue #6: Brains have been squished, now let’s make a stand, head to the highest place in town. Up near the top, where we walked and talked, you will find a gruff man, for he has been waiting here freezing to show you the land. 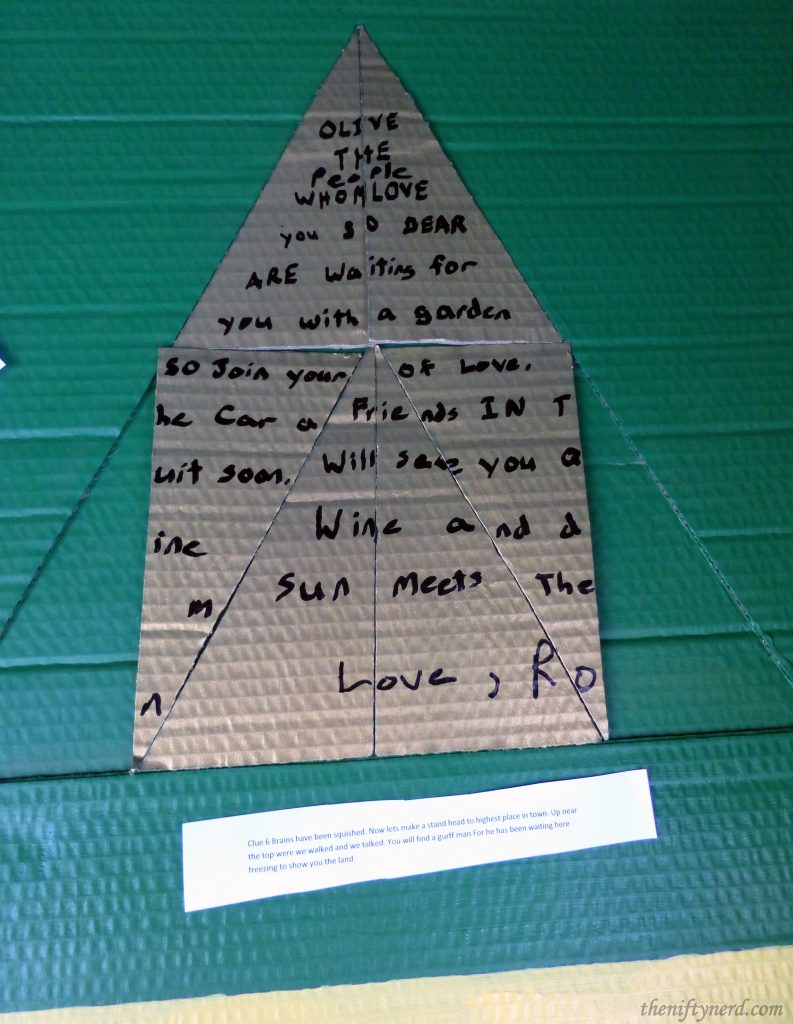 This clue of course pointed to Enger Tower. Once there, I was greeted by another Magic friend, Bob. Bob popped his car trunk and presented Disney Princess Trivia to me. My task, in order to pass, was to correctly answer 3 of the 4 questions. I chose Mulan first, cause, well, Mulan! I correctly identified Mulan’s travel companions and chose the Jasmin question next. After giving the name of her pet tiger, I chose Pocahontas as my 3rd question, which I correctly answered by giving the name of her prince. I was then awarded with clue 7 and another piece of the Triforce.

Clue #7: The time has come for you to make haste. Head back home so you may prepare for the end of the race. 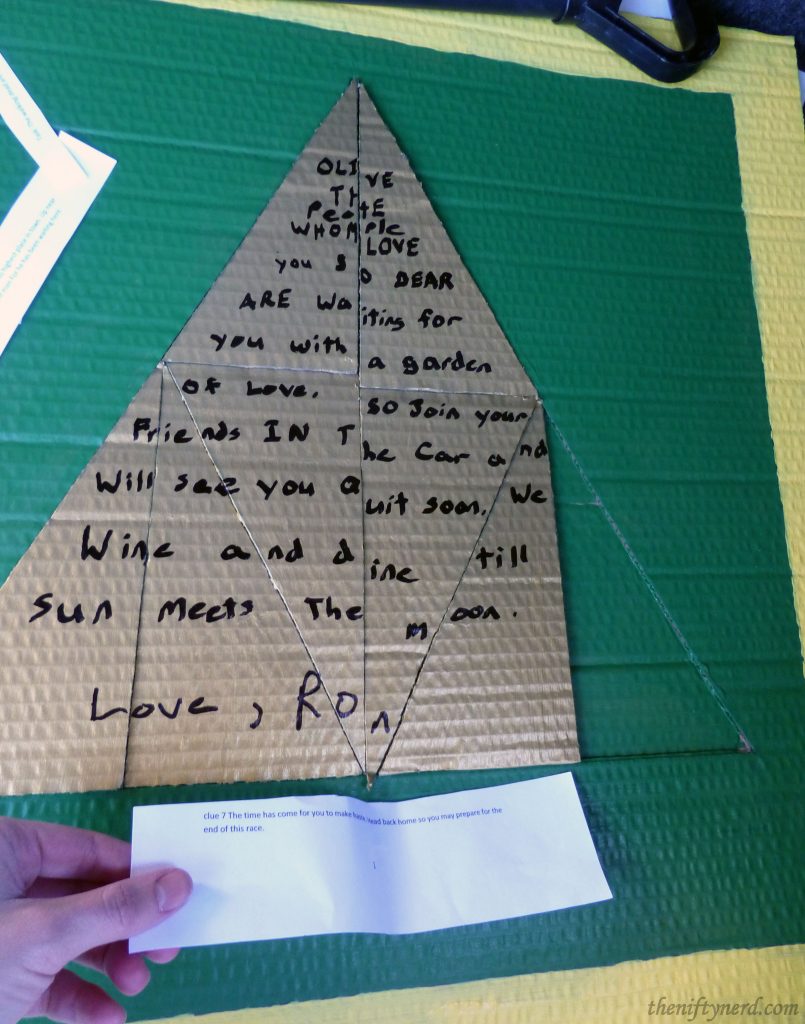 Just to be sure, I doubled checked that this time home actually meant home; it did! Shelby and I headed back to the apartment where I was greeted by a couple of faces from out of town; Mitch and Justin. My task was to race (and win against) them in Mario Kart 64; which had the possibility to be a tall order. I buckled up my favorite racer, Luigi, and off we went. I ended up winning a handful of races and managed to snag 3 of our 4 battle games. Afterwards, I was awarded with the final piece of the Triforce! It revealed the final message and clue of the day. 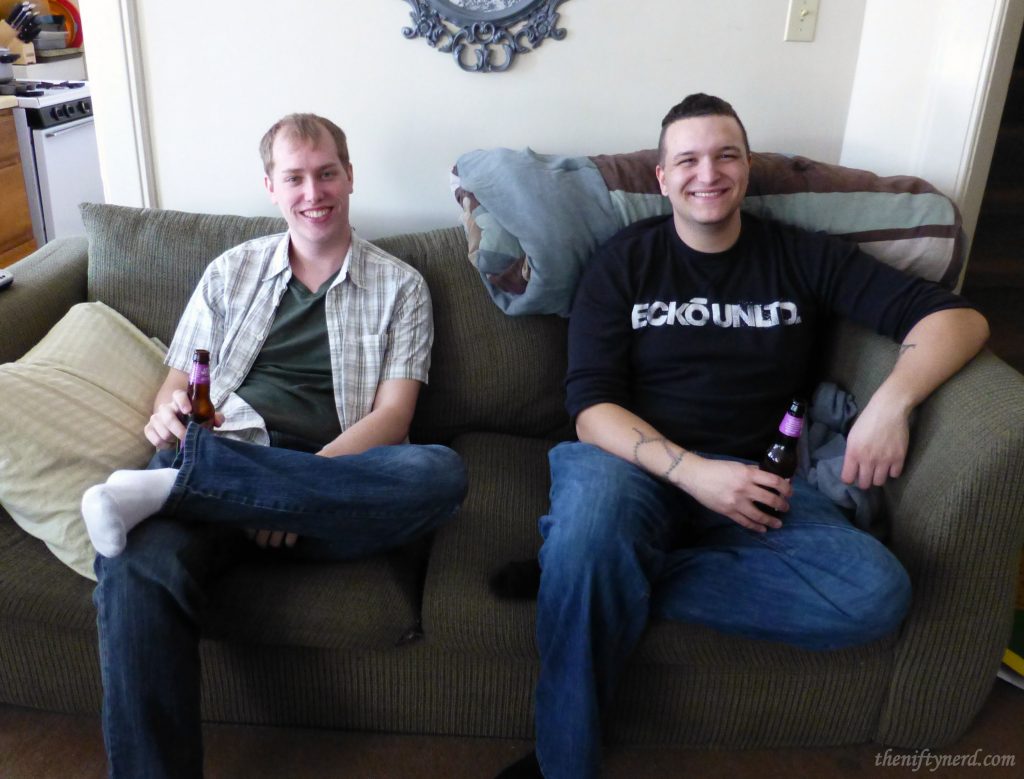 Olive the people whom love you so dear, are waiting for you with a garden of love. So join your friends in the car and I will see you quite soon. We will wine and dine till the sun meets the moon.  Love, Ron.

Before heading out the door to the Olive Garden, Shelby informed me I was to change into my red dress, which admittedly made me pause and wonder for a moment.
Once we arrived at Olive Garden, I was greeted at the front door by Ron. We walked to our table were I was surprisingly greeted by, not only everyone from throughout the day, but also by additional family members of both mine and Ron’s (including my Mother who was in town visiting from Alaska). Sitting at the table was a mini Mt. Doom the staff had created out of bread sticks and sauce. After saying hellos, I removed the One Ring and cast it into the fires to destroy it! 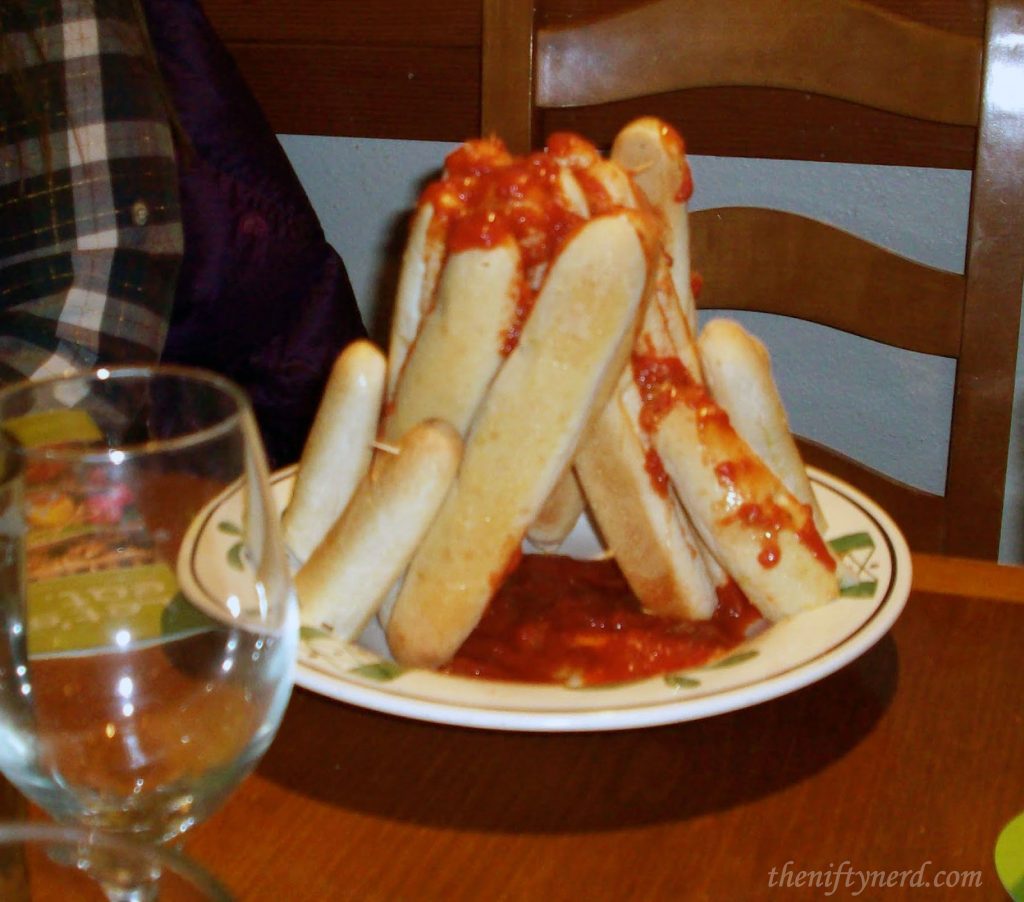 That was when Ron informed me had another surprise for me. He told me that I didn’t come here to destroy the One Ring, but to find the One Ring instead. He then got down on one knee and asked if I would marry him!
I was a bit speechless at first, but then I said yes (and yes, I’ll admit to tearing up)!!! He couldn’t have picked a more beautiful ring either; it’s simple but elegant and will pair nicely with whatever nerdy themed wedding bands we decide upon ;-).
All in all, it was an amazing and fun day! We have such awesome friends and family that helped Ron carry his whole plan out. Never thought I’d complete the Triforce and destroy the One Ring for my birthday…and then have it turn into a surprise engagement! After an epically nerdy day like that, how could he not be the one! 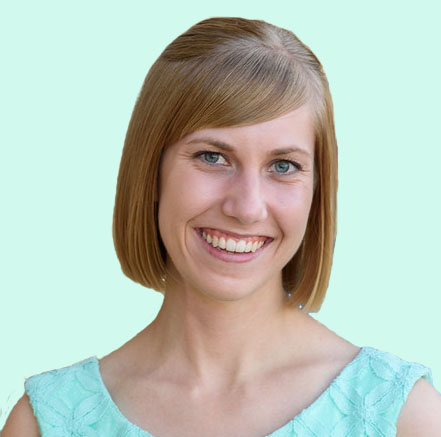