By Jessica (aka The Nifty Nerd)
Posted August 7, 2016
In General Geekiness
Mysterium Board Game Review2016-08-072018-08-04http://theniftynerd.com/wp-content/uploads/2016/09/niftynerdlogodarkedit.pngThe Nifty Nerdhttps://theniftynerd.com/wp-content/uploads/2016/08/mysterium-review.png200px200px
4
Thanks to my friend, David, I finally had the opportunity to get my hands on a copy of Mysterium and play the game. To share my thoughts and experience, I figured I’d write up a Mysterium board game review for others interested in the game too. Keep reading to find out more about this game — which I’d classify as a co-op version of Clue meets Dixit -but way awesome!
Disclosure: This post contains affiliate links.
Let me start by saying this -if you dislike laughing, thinking abstractly, or being caught in ‘what the heck?!?!’ moments, then this game isn’t for you.   …Even still, I recommend giving this game a chance.

The game is set in the 1920’s. A group of psychics from around the around, each specializing in a different type of clairvoyance (tarot reading, crystal divination, etc), have converged on a house to help solve a murder mystery in order to put a ghost’s spirit to rest. The day is Halloween -the night the spirit world and human world are closest, and communication between the two is strongest.

The psychics have 7 hours (7 game rounds) to identify the murder suspects, locations, and weapons based on visions communicated by the ghost. If they succeed, there’s one final round where they identify the culprit from the gathered suspect groups based on a final shared vision from the ghost.

Players decide who will play the ghost. For the rest of the game, the ghost says little to nothing, communicating to the psychics through only their vision cards. The players choose a difficulty level, which determines how many people, location, and weapon cards will be in play from which to guess suspects.

As the rounds progress, each psychic must first identify their unique suspect person, followed by the murder location, and finally the murder weapon. They must identify each item in that order, before progressing to the next card type. In order to make the identification, the ghost will pass them vision cards that they must “read.” The players may converse with each other in an attempt to interpret the ghost’s visions.

If  a player correctly interprets the ghost’s vision, they move on to the next card type and receive new clues. If they fail, they stay on the same level and receive additional clues to enhance their overall vision. During each round, players may predict whether another psychic’s guess is correct or not with their clairvoyance tokens. If these are assumed correctly, then their marker goes up the clairvoyance track, which helps them interpret the game’s final ghost vision in the last round.

If the players do not all successfully identify their unique person, location, and weapon combos before the clock strikes 8 pm, then everyone loses the game. If everyone succeeds in finding their cards, then the final round is triggered.

The ghost uses the cards in their hand to identify which set of collected cards is the actual culprit. They pass a shared vision onto the psychics. At this point, the psychics interpret the vision individually and secretly vote for who they think the culprit is. The higher on the clairvoyance meter a psychic is, the more of the ghost’s vision they will see before voting. If majority vote is correct, then everyone wins. If not, then the game is lost. 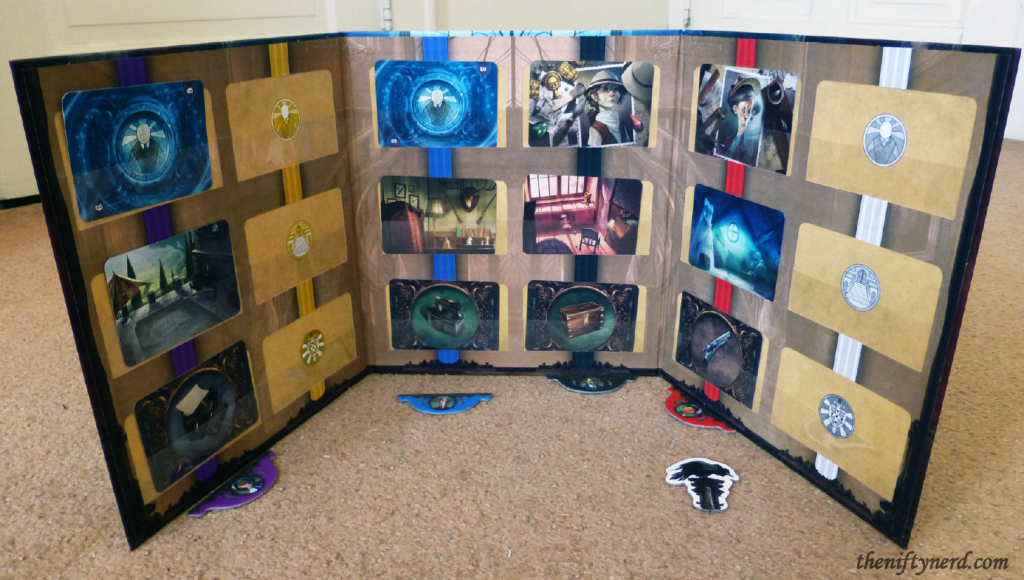 I greatly enjoyed this game and it’s already on my board game wishlist to add to my collection. This game can be as annoying as it is fun; and I mean that in the best way possible! Like I said, this game resembles the classic themed play of Clue, in that you’re trying to solve a murder mystery by identifying who, where, and with what; only Mysterium is a co-op version.

What makes this game particularly fun are 2 aspects. The first is it’s like Dixit’s gameplay, only it fixes what Dixit was a lacking -a contextual story base. Second, the game has 2 roles and ever-evolving combinations of cards to keep the game fresh. Despite playing the game multiple times, 3 days in row, I didn’t tire of it. Game play was kept new by switching roles and always having different clues to figure out different sets of cards.

My first time playing was as the ghost (I newly taught the game to everyone playing that time). Imagine my shock when I draw my first hand and realize I have to get a psychic to guess that their person is the chaufffeur when my cards are showing a pile of golden treasure, a rock cliff that looks like a wolf howling at the moon, a chair floating in the clouds with keys and ropes, and a fat rat sitting on chess board.
BUT this is what makes this game great! Having to think of ways to tip off the psychics to their cards with the abstract/dream-like cards. It was a puzzle my brain immediately set out to solve.

Here’s how a typical round can end up:

Ghosts: *Passes yellow colored vision card to Sara because she just got done saying last round how ugly the yellow color on the clock was.*

Sara: Oh, this card must go to the clock in the bedroom because I just got done saying how ugly that yellow color was.

Ron: But look, there’s a bunch of keys on that card and there’s a locked treasure box in attic, it must point to the attic instead.

Nick: No look, there’s a ship with a life buoy on the card too, it must actually point to the pool.

Sara: You’re right Nick, look how prominent that boat is on the card, much more so than the keys, it must be the pool -you’re a genius!

Ghost: *thudding noise from the ghost banging their head on the table*

In all honesty though, that’s what makes this game great and entertaining. It’s interesting to see how the ghost devises clues for the psychics and even more interesting watching how the psychics interpret those cards.

I played the game with 2 players, 5 players, and 7 players. I enjoyed all 3, but did feel that the 2 player game was lacking. In a 2 player game, the psychic plays the roles of 2 psychics, but you lose the most entertaining aspect -the social piece among players as they attempt to decipher (or rather, debate) the visions. Instead you’re more or less talking to yourself in order to give the ghost a glimpse into what you’re thinking.

Playing the role of the ghost is definitely a lot more involved and challenging than playing a psychic I feel. Honestly, the ghost can set the whole pace for the game, as they work to pick visions for the psychics. This wasn’t an issue for me, but could be stressful for some…no worries though, cause you can always just play the part of the psychic every time!

And one final note -the art in this game is just fantastic. It’s beautiful and detailed and really makes the game feel complete and come to life.

And that’s my Mysterium review. Have you had the chance to play the game? What did you think of it? Interested in learning more about another game? Let me know in the comments and I’d be happy to answer questions or do another review -I do love playing board games after all!

Ready to give Mysterium a try? Order your own copy right now!