You guessed it! Back with another project from our wedding. This time I’m going to share our Settlers of Catan wedding centerpieces. The 2 of us love playing board games, so we had to include something board game related in the wedding.

The husband came up with a great idea for the Settlers themed centerpieces. It ended up being a fun challenge to bring these to life. While we wanted to represent the game, we wanted the centerpieces to still feel somewhat elegant and not be overly cheesy for those who didn’t know or understand the board game connection. We ended up doing lots of brainstorming and going through a bunch of iterations for each one.

(Sorry about some of the photos. We were suppose to have professional photos taken of each centerpiece but unfortunately our photographer missed a couple the day-of. The centerpieces were taken apart the night of the wedding so we weren’t able to get any better photos of them.)

What would a wheat centerpiece be without a bushel of wheat? We picked up bouquets of the stuff from a local craft store. We bound the stems together just below the visibility line within the vase, then trimmed the excess stem length off (meaning the stems were only a couple inches long -just enough to hold them in the vase, but not go all the way to the bottle, to leave room for lighting).
We added submersible ball tea lights to the vase for an added touch -and good thing we did- because the night of our wedding the power ended up going out >.<  Haha. Thanks to our lit centerpieces, the reception room actually looked pretty great and everything ended up turning out well despite losing power for a couple hours.
For the vase filler, we used water beads, which worked well to disseminate the light from the LEDs. 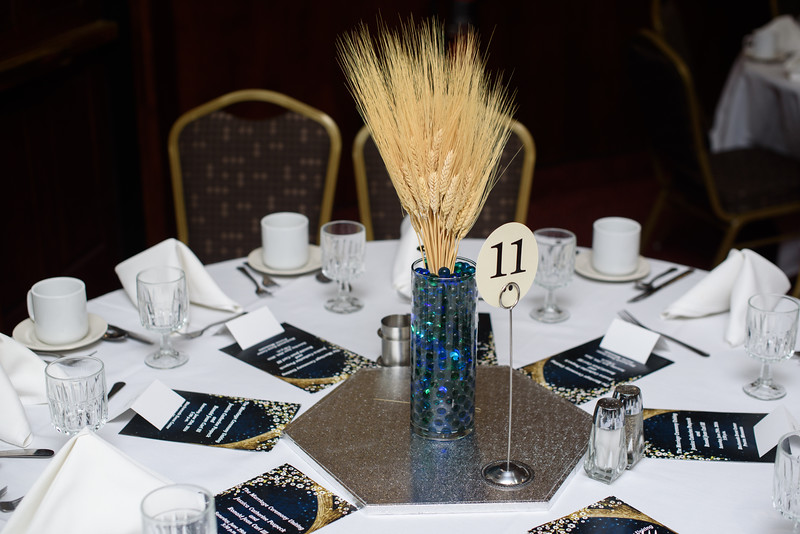 Wood was one of the most difficult centerpieces for us to figure out. I’m sad we don’t have a better picture because it ended up being my second favorite one! We created a base of moss in the bottom of the vase. We then added artificial branches that had tiny little leaves on them. We topped the vases with moss covered planters. Inside the upside-down moss planter, we hung a[n invisible] tea light with fishing line.

Using our hands, we made large yarn pom-pom balls from fluffy, white yarn. We set 3 pom-poms on top of skinny wooden dowels in a vase filled with water beads and submersible lights.
Most of our Settlers of Catan centerpieces contained water beads as the vase filler. We had originally tried items like marbles, but decided the water beads looked the best. Water beads start as tiny round plastic-type pellets. When you add water to them, they expand into squishy marble-like objects. Since our wedding colors were royal blue and green, we purchased 2 colors of beads. The week of the wedding we expanded the pellets with water, then stored them in separate ziploc bags until the day before the wedding (to ensure the dye colors wouldn’t mix and to keep them from dehydrating). The expansion process can take hours, depending upon the brand you purchase, so keep the prep time in mind when planning. 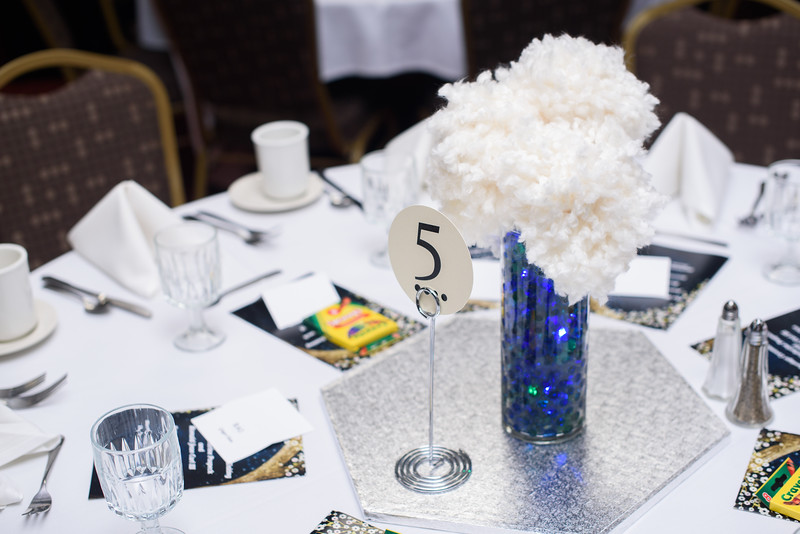 The desert was a pretty simple centerpiece. We found some fun cacti and planted them, then topped the bowl with sand. We still have this centerpiece put together. 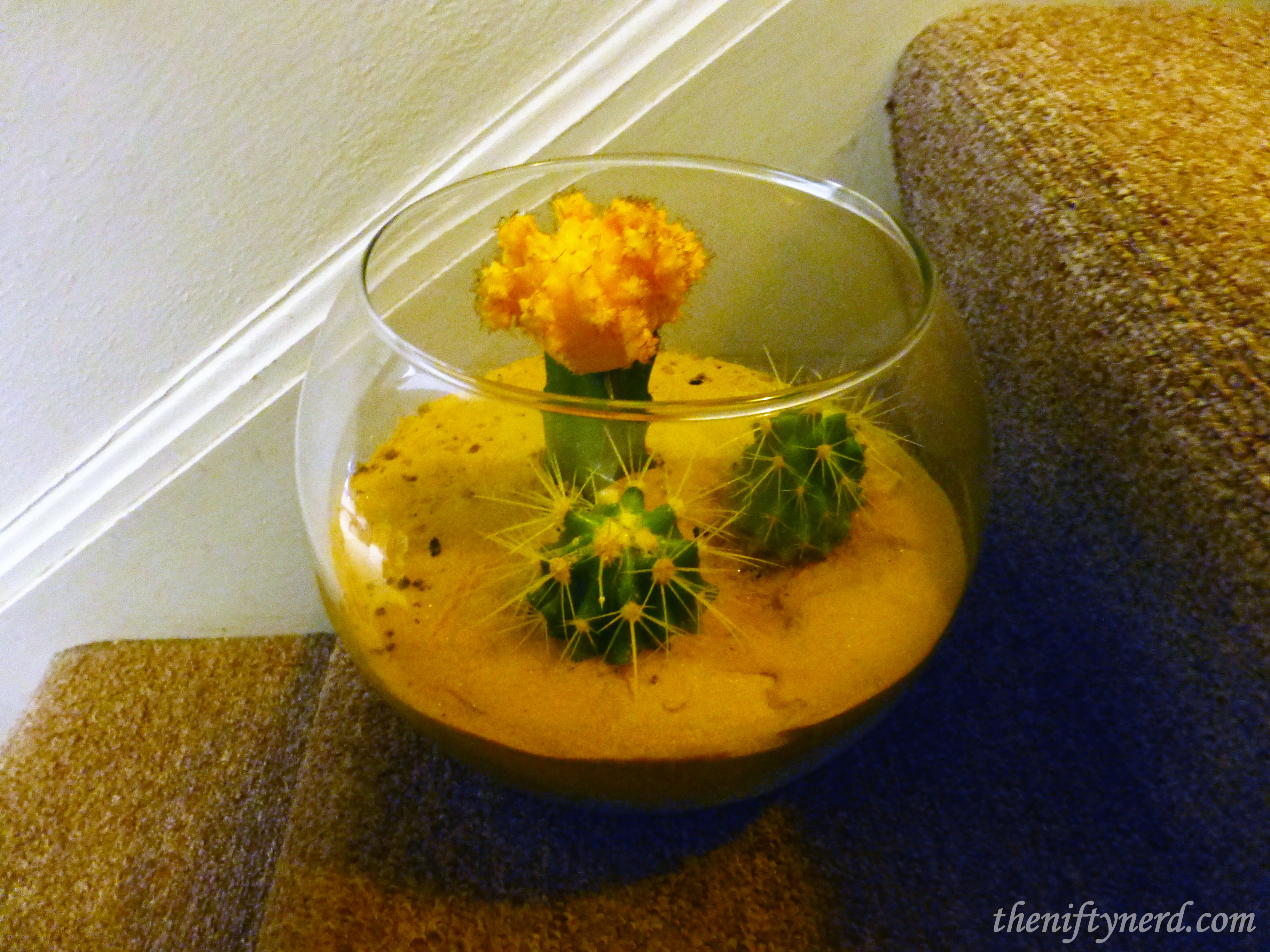 The clay centerpiece was another difficult one to figure out -how do you make bricks look elegant? Hubby came through on this one and it ended up being our favorite one. We purchased bricks that had 3 holes cut into them, then just added moss (what was used in the base of the wood vase), real succulent plants, and candles. Our candles were battery operated, but you could totally use real ones too.

For the ocean centerpieces we filled a wider & shallower bowl with aqua colored water beads. We then placed a smaller fish bowl vase in the center. The fish bowl vase was filled with sand and topped with a couple seashells and a dried starfish. We added blue (instead of white) colored submersible lights to this one.

For the ore Settlers of Catan centerpiece we ordered calcite coal off ebay. Once rinsed off, it actually has quite the sheen to it! To finish it off, we added a simple, single LED candle to the center. 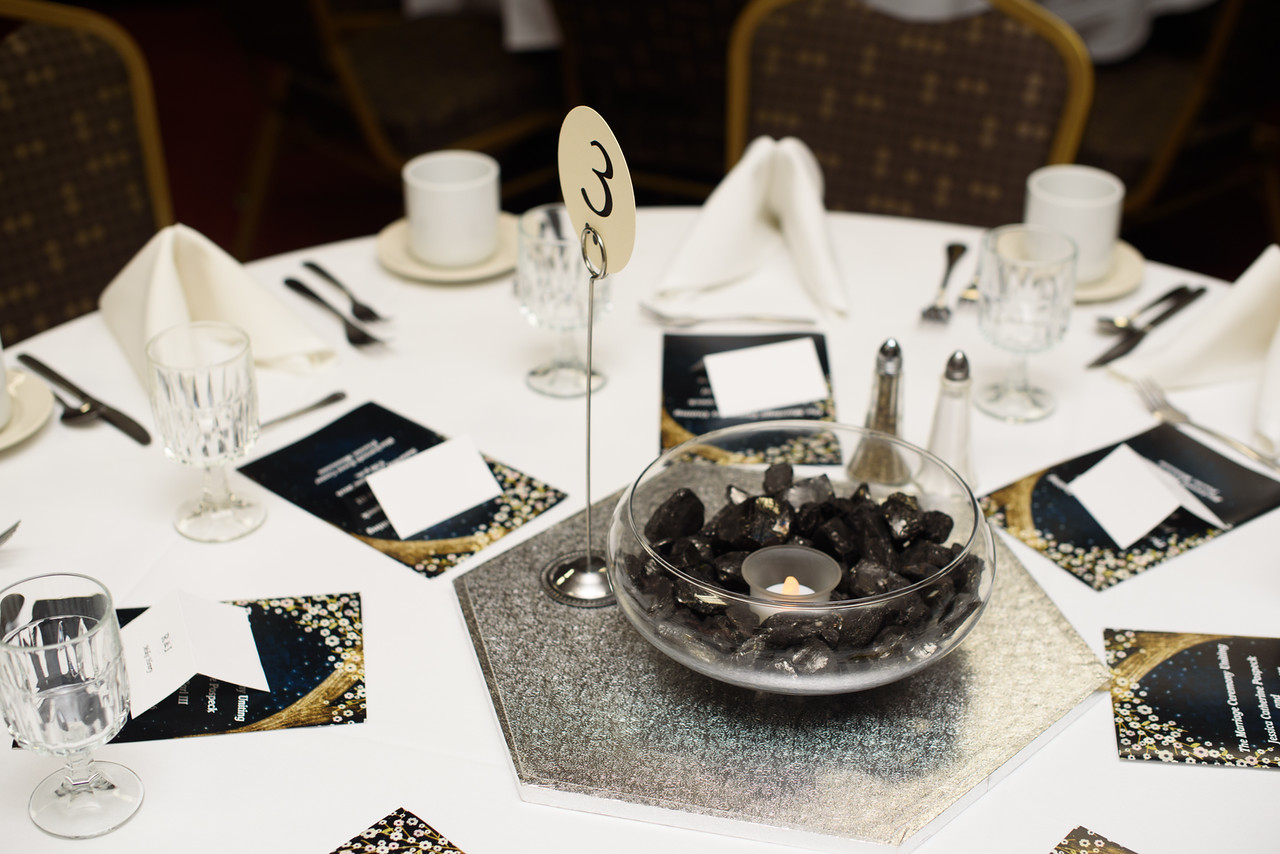 To tie all of the centerpieces together and bring in the hex shaped board game pieces, we staged each centerpiece on top of a hexagon-shaped, silver drum board (it’s what bakers build their cakes on top of). For the table numbers, we replicated the number circles in the game using Minion Pro font on circle sheets of cardstock paper.Again, these photos definitely don’t do the centerpieces full justice. We had a few skeptical family members whom we discussed our Settlers of Catan idea with. After the wedding they complimented us on how well we pulled them off and were able to make them look nice despite being totally geek themed :-)Looking for more geeky wedding DIY projects? Check out our Nintendo video game card box and our Magic the Gathering cake topper. 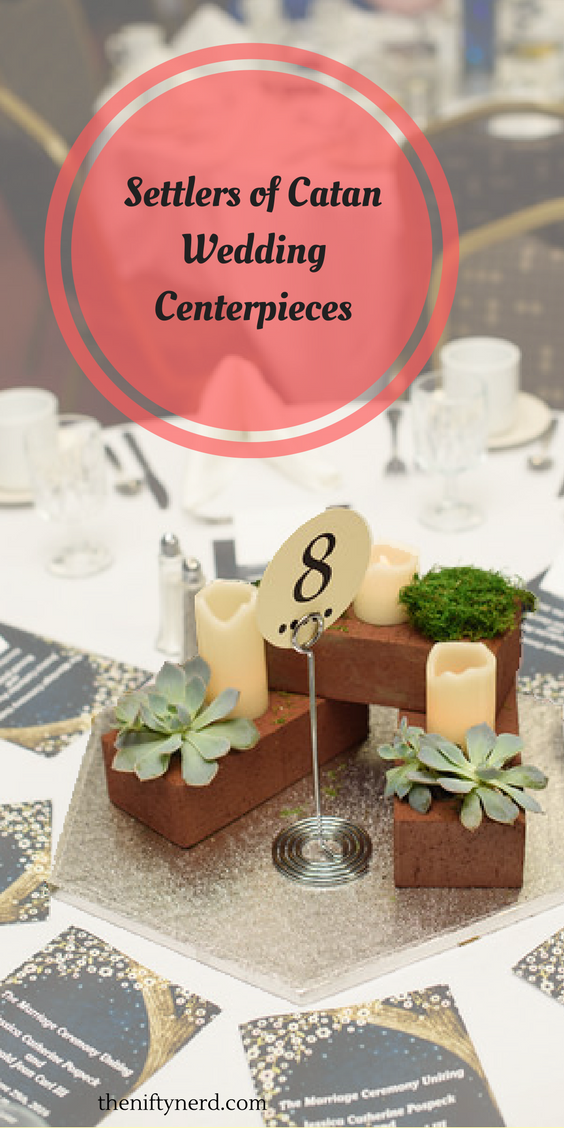